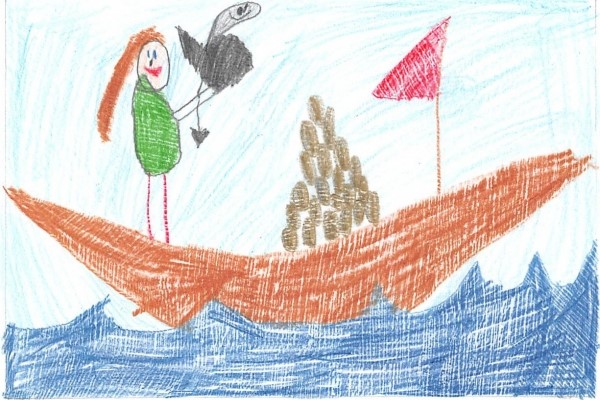 "Ahoy, Matey!" Come join Hilary and the Gargoyle for a swashbuckling adventure in Magic Marks the Spot, written by Caroline Carlson and illustrated by Dave Phillips.

Although Hilary Westfield's parents wanted her to go to finishing school to become a proper young lady, Hilary craved adventure and dreamed of being a pirate. Despite her father's efforts to prevent Hilary from being a pirate, Hilary joined a pirate crew and sailed on the high seas, and she learned many lessons along the way. Hilary learned that no matter what gender you are, you can still do whatever you want, including being a pirate. "Arr!" Hilary also learned to be brave and to stand up for what is right. Finally, Hilary learned that not everyone can be trusted to make the right choices with power. In the end, with some help from Hilary's friend, the Gargoyle, Hilary used her pirate skills to find treasure and to restore the balance of power in Augusta.

In my opinion, Magic Marks the Spot is a great book that is full of adventure. I liked the book because Hilary used her pirate skills for other people instead of just for herself. My favorite part of the book was when Hilary became a true pirate at the end. This proved her lesson that no matter what gender you are, you can still do anything you want, including having a job that is normally thought of for the other gender. My favorite characters in the book were Hilary and the Gargoyle because they defeated the villains and helped the good people of Augusta.

In conclusion, I recommend this book because the characters are brave and willing to stand up for what is right. This book is good for kids ages 9 and up. If you are a reader who enjoys suspense and adventure, you are sure to love Magic Marks the Spot.