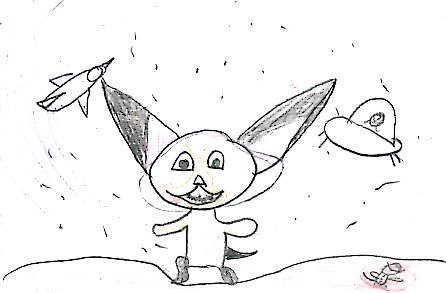 Skippyjon Jones loved red spice. He went to his mom and asked for some spice. He went to his room and played in the spice. The spice made him red. He sneezed and went ca-chooey and flew into his closet. He put on his space suit and floated into space. Skippyjon saw all his toys come to life. Next he saw his friend with one eye and he was a martian. They had a fight over his sock monkey. At the end, Skippyjon came out of his closet and flew into his bed. Then his mom came running into his room to see what was going on.

My favorite part of the story is when he went ca-chooey because it was funny. My least favorite character is the martian because martians are scary. This story relates to my life because Skippyjon and I both like the color red. The pictures in the story help tell what is going on.

I think others should read this story because it is hilarious, amazing, and awesome.

Jenna V.
is a student in
Mrs. Okamura's Class