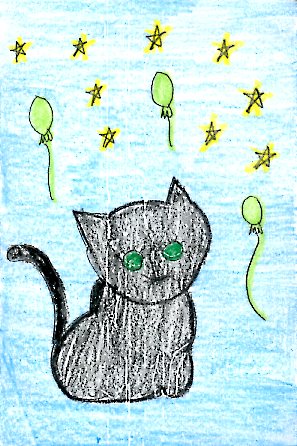 There is a tiger named Flame. He is disguised as a kitten with Emerald eyes and black fur. He is hiding from his uncle who wants to be kill Flame so he can be king. Flame meets Sadie, a ten year old girl. Sadie hides Flame in her house, but he is afraid of cats. Sadie wants to join gymnastics in the circus, but her best friend, Jenny is jealous. Then Flame helps Sadie make a huge sign with Flame's magic for Jenny. They become best friends again. Flame has to leave because his uncle found him.

My favorite part of the story is when Flame paints the sign because it was helpful and magical. My least favorite character is Grace because she is mean to Sadie. This story relates to my life because once I found a kitten, but I could not keep it and I wished that I could. This story has a few pictures the help me know what the characters look like.

I think others should read this story because it is fun and magical.

Isabella T.
is a student in
Mrs. Okamura's Class