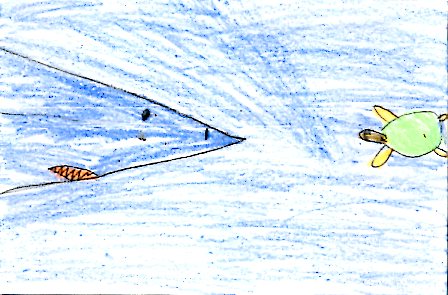 In Turtle, Turtle Watch Out!, the baby turtle left her nest. Then she went to the ocean and saw scary things like a shark. Next, she went to a house of bright light. She thought it was the moon. Finally, the baby turtle grew older. She became a mother and laid some eggs. Her eggs would become baby turtles too someday.

You should read this story because the the shark chases the turtle. This story is very cool and awesome.

Blake L.
is a student in
Mrs. Okamura's Class