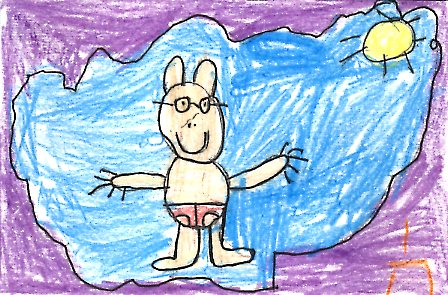 In the story Arthur's Underwear by Marc Brown, Arthur ha the same dream about forgetting his underwear. He tells Buster and asks him not to tell anyone, but Buster tells everyone. One day at school, his nightmare comes true. His underwear rips! He doesn't know what to do until Mrs. MacGrandy helps him and tells him the banana story. At the end, Buster is the one who dreams about underwear.

Our favorite part of the story is when Arthur dreams about himself being a superhero because we liked it and laughed. Our favorite character is Arthur because his underwear ripped and everybody saw it. This story doesn't relate to our lives because we never had our pants ripped or dreams like that. This story has pictures and they help because they tell what Arthur is dreaming.

We think others should read this story because it will make you laugh.