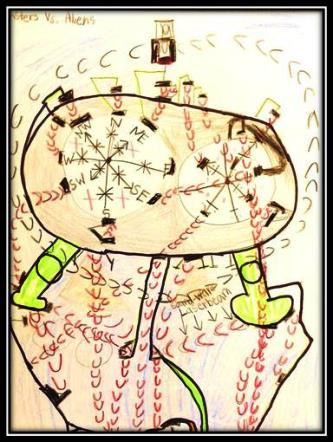 Do you like aliens? Then this book would be a great book for you! This book is called Monsters vs. Aliens. There are four monsters that have been trapped in prison for a long time. One is named Dr. Cockroach, one is B.O.B., one is the Missing Link, and one is named Ginormica. They’re working on fighting a robot. They’re not scared. They are actually really, really strong.

In the beginning you could really tell that they are strong because they were fighting the alien’s clones when the laser’s red beam circled the spaceship and bullets boomed through the walls.

The clones were hard to defeat because they kept getting back together when the monsters blasted them apart. The aliens were strong but the monsters were stronger and they also used their brains so the aliens got defeated!

Another reason I think these characters are so strong is because they survived the battle. During the battle inside the spaceship, the ship was already cracking and flaming and they managed to get out quickly.

Even though these monsters were scary when they first went to town they were still heroes, because they were actually helping the town to get rid of the robot!

So now I think you will agree that those monsters are really strong and also helpful!