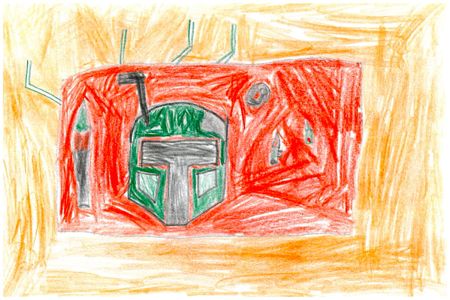 This story is about a bounty hunter, Boba Fett, and how he survived his “death” at the hands of a Sarlacc. A Sarlacc is a huge creature that digs itself in the sand and has tentacles that it uses to devour its prey. Boba Fett gets injured by the Sarlacc’s saliva. He is found by Dengar and a slave girl who doesn’t know who she is or where she came from. Dengar and the slave girl take him to a cave and help him recover with the help of two medical droids. Once, their cave was destroyed by bombers. They settled in the Sarlacc, who they thought was dead. They soon found out it was not dead. At the same time, Bossk, a lizard humanoid, thinks Boba Fett is dead, but deep in his heart he is still......scared. The lesson that I learned was that a truly awesome villain never really dies.

I LOVED this book because it was about my favorite Star Wars character. It was pretty interesting because it went back from Boba Fett’s past and continued to the present. My favorite part was when Boba scared Bossk and almost killed him. This book is unlike any other because the main character isn’t good or bad and has a crew who doesn’t really like him.

Other people should read this book because it is pretty complicated but well thought out. Read this book and learn about being a true bounty hunter. I recommend this book for all readers but romance readers. This book was shining high from start to finish. The writing style wasn’t elegant, but it had a dynamic storyline.