Keeper of the Grail: The Youngest Templar: Book 1

Keeper of the Grail: The Youngest Templar: Book 1 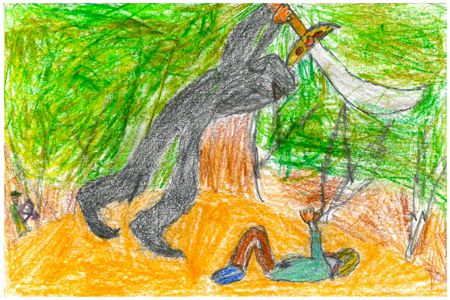 Everyone I know has insisted that I read this book. All of the events in this book were what I had expected and I felt that this book resembled other books that I have read before.

This story is about a 15 year old boy, named Tristan, who is left alone as a baby and raised in an abbey. The abbey teaches him that hard work eventually pays off. But when a group of Templars, knights who fight for God, come to the abbey in search of shelter and food, problems occur and things go awry. The knights tell Tristan that they are journeying to the big city of Dover to go sail towards Jerusalem, a holy city, to capture it and put it under their control.

The knights ask Tristan if he wants to come with them and he accepts. When the Templars reach Jerusalem and are just settling in, a group of Muslims attack them and Tristan is driven away from the knights. As he flees, a Templar tells him to hold the Holy Grail, the most holy Christian relic, safe. He decides to journey to the great city of Tyre where he can catch a boat to England so that he can hide the grail from bad people.

Along the way Tristan meets up with the king’s archer, Robard, who helps him get to Tyre. While they are journeying they are attacked by a group of Muslim assassins! One of the assassins is shot, which caused the others to run away. They take the arrow out of the assassin easily, not painfully, only to find out that the assassin wants to join them. Her name was Maryam. She showed them to Tyre and when they were there, Muslims attack and… I won’t spoil a good story.

I thought that even though this book was sometimes predictable; it was still a very interesting read. In some of the scenes I got chills, like in one scene where everyone thought that they were safe but they were attacked by bandits. Another scene was when Tristan was in hope of getting the Grail hidden, but a dog had taken it and wouldn’t give it back. My favorite part was when there was a bad storm and Tristan was flung off of a boat. My favorite character was Maryam because she looked and acted like a very kind girl but she had mysterious and timid looks all of the time. To me that made her a good warrior.

I would suggest this book to the grades of fourth or higher due to the high level vocabulary and the weird or even paranormal scenes. I loved this book and think that you should give it a try.