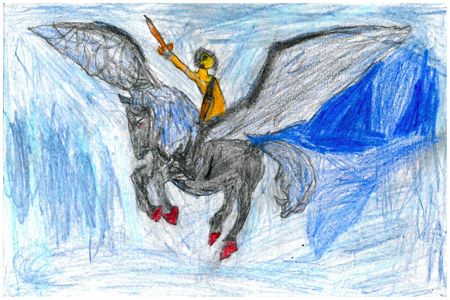 Have you ever felt like the fate of the world was in the palm of your hand? This feeling became a reality for a fourteen-year-old half-blood, a sondaughter of a god and a mortal, named Percy Jackson. He is the son of the god of the sea, Poseidon.

Percy has just recently discovered that the protector of his half-blood camp is actually a girl named Thalia who is the daughter of Zeus, king of the gods. Percy and Thalia are sent on a journey together to find Percy’s good friend Grover, a satyr, who has found two half-bloods but was being attacked by a poisonous manticore. While fighting the manticore, a mysterious woman who is later discovered to be the goddess of the hunt, Artemis, helps them along with a huntress named Zoe. Artemis sets off to destroy a monster that was said to overthrow the gods while Zoe sets off on a quest to help find the monster and restore peace to the gods with Grover, one of the new half-bloods, Bianca, and her old enemy, Thalia, but without Percy.

So Percy has the idea of going undercover to follow and help them on the journey. He finds out that the manticore and its leader are planning to destroy them. They send undead skeletons to kill them and the leader’s favorite, the Nemean lion. Percy is found by the skeletons that chase him into a space museum where he finds his friends. The skeletons are easily fended off, however, the lion is a tough fight to the point where an arrow is shot at Percy. But the lion is defeated and Percy takes its magical bulletproof fur.

Later that day during the evening, the other skeletons creep up on them and they are chased into a junkyard full of magical items that said,” beware, do not touch.” But despite the warning, Percy touches things and just as the sign said, a huge metal warrior that is forty feet tall with a massive sword pops out of nowhere. One of the girls desperately tries to fight and destroy the warrior but she is killed… read this story to find out who this person was and what the fate of the others is going to be.

This story reached out to me. One of the reasons is because it was like I was Percy and felt all of what was going on around me. Another reason is that this book was just overall fantastically written. It had so much suspense and intrigue with a passion in the storyteller’s words that many love. My favorite scene was when everyone had just gotten a break when a massive boar came from the woods and flanked them. My favorite character was Percy because in a way it was like I could picture him as a normal boy. I felt like I had known him for a while and I was with him the whole entire trip.

I would recommend this book to someone in third grade or higher because this book is not that hard to understand unless you have not read the first two books in this series. It is appropriate, in my opinion, for someone of that young age. It could take a while depending on how fast of a reader you are to finish. It is a great book for fantasy lovers. I am a fantasy kind of guy, so it was quicker for me.