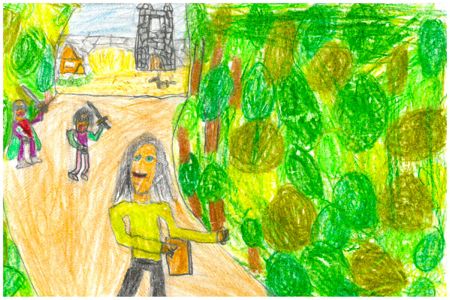 Have you ever been accused because of something that you did not do? Well that is what happened to a poor peasant boy named Crispin.

In this thrilling tale, Crispin goes through tragic events. One of these events includes his father leaving when Crispin was a little boy and soon after that his mother dies. To make it even worse he is proclaimed a “wolf’s head.” A wolf’s head is a person who is claimed to be not human and therefore anyone from Stomford, England in the 1400s would be allowed to kill him. Because he is claimed to be a wolf’s head, he has no choice but to run away and hope that the world can give him a better life.

When I first saw this book, I thought it was not going to be good because the cover did not look appealing. It depicted a picture of a boy carrying a torch through a forest. It seemed as though the story would not have much action or suspense. But as I read further into the book, I became surprised by all of the thrills, adventure, and …well, you will just have to read it to see for yourself.

I liked how Crispin managed to figure out what to do in different dangerous situations. For instance, when his enemy, the Steward, John Aycliffe, saw Crispin eavesdropping on an important conversation the Steward was having with a knight, Crispin ran up into a tree with monkey-like reflexes to avoid capture. Later, when it seems as though all hope is lost for Crispin, the boy is cared for by stranger that teaches him juggle, play flute and to defend himself with a knife. Crispin later must use all those skills to survive.

There are many unusual characters in the book including, a giant named Bear that helps Crispin escape a dark and dangerous forest, tavern keeper that feeds and shelters the wolf’s head, and mysterious man who joins Crispin’s fight to help all the people f the land. But my favorite character was definitely the Steward because he was evil, but funny in the way that he failed time after time to kill Crispin.

I recommend this book to fifth grade and older readers because of the complicated vocabulary and complex, yet fast paced and intriguing, plot.