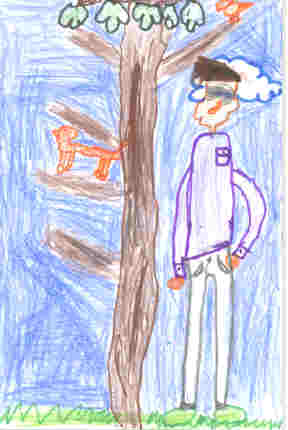 If you like springtime, then you’re in luck because this book review is about an old man in spring! The book is called Mr. Putter and Tabby Paint the Porch by Cynthia Rylant.

To begin with, once there lived this elder called Mr. Putter. He had a fine cat named Tabby. One of those spring mornings, Mr. Putter and Tabby looked out the window, and as they looked out the window they felt chipper, the birds sang, the sun shone, and the flowers bloomed. That’s what made me feel like Mr. Putter and Tabby were relaxed and ready for whatever came in their way that day. The both of them went to the front porch with a book. That’s just a sneak peak!!! Then, they decided to paint the porch because they didn’t like the color. But later, a chipmunk runs across and ruins the paint and they have to paint it again!

I relate to this book because it reminds me of my uncle that passed away a couple of years ago. He was like Mr. Putter because they have glasses that are alike and we read on the porch together. The funniest part of the book was when another animal runs across the porch…a cat! I laughed out loud at that part! I liked this book because it was funny, silly, and I kept wanting to read it.

In conclusion, I recommend this book to kids who are five to eight years old. Remember…reading is good!