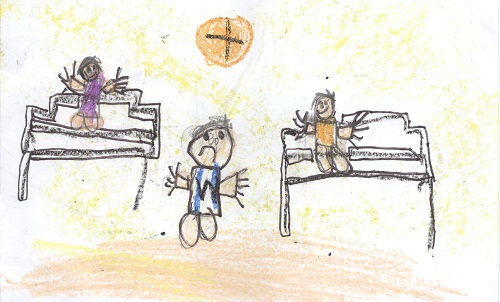 If you enjoy sports books then you should read the series Team Jake Maddox. In this book Win or Lose a boy named PJ is bad at shooting free throws. At one game PJ’s team was losing by one point when PJ got fouled. PJ missed the first free throw. Then he missed the second free throw. His team lost because he missed the two free throws. When PJ went to school the next day the whole school was mad at him. PJ asked his friends Dwayne and Daniel to help him get better at shooting free throws but they couldn’t help him. PJ thought of quitting the basketball team. PJ’s dad said, “Don’t quit the team.” Then his dad gave him advice. Will PJ’s dad’s advice help him? Read the book to find out

I thought that some parts were very interesting like when PJ’s friends, Dwayne and Daniel could not help PJ get better at shooting free throws. This part reminds me of when I was bad at playing soccer and my friend Tommy helped me get better. I also liked the illustrations. They looked like real people. Another thing I liked is how the author described the characters. For example PJ was described as tall so he played center, Dwayne is described short so he plays point guard.