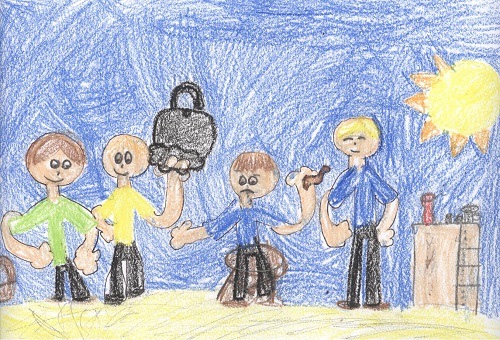 If you like books that are funny you will not be able to put How to Eat Fried Worms down. Billy, a young boy gets into a bet with Alan, Tom and Joe. Alan, Tom and Joe want Billy to eat 15 worms, one worm a day. If Billy does do it, he would get $50 from the boys. Billy really tries to get out of the bet because he doesn’t want to get sick because of the worms. The other boys are worried too because they don’t know where to get 50 dollars. Can Billy do it? Read this book to find out.

I really enjoyed this book. It kind of had me worried at the beginning because I was not sure if Billy could eat all 15 worms. I wouldn’t want to. One of my favorite parts is when Tom, Alan and Joe go away for a day and the boys ask Billy’s Mom to coach Billy so the boys know Billy ate the worm. I think Billy changed a little through the story. In the beginning he really did not want to eat the worms but in the end it didn’t bother him so much. It reminded me of my life because if I was in a bet where I had to eat worms, my mom would make me eat the worm. A part that really worried me was when Billy didn’t feel good because of the worm. So his mom called the doctor. But the doctor said he was ok.

I recommend this book to third graders and fourth graders. It is for anyone who likes a funny book. This is a book both boys and girls would love. They would like it because it isn’t too girly or too much for a boy. It has 127 pages. I loved reading How to Eat Fried Worms.