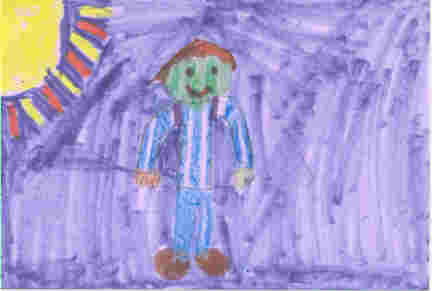 Come along on an inventing adventure and join Adam and Sam in the book Melonhead by Katy Kelly.

To begin, Adam is a fun loving kid who was given a school project about reinventing something. He kept reinventing things that were already invented. He spent most of his time trying to think of new ideas, but keeps getting distracted like most young kids. He and his friend Sam later chose to do the reinventing project together thinking it would be easier. Their project was last minute, but it turned out to be very good. I think the author was trying to show how kids try to complete their homework, but get distracted easily.

I loved this book because it was funny, like the part when he acted like a ghost. That was also my favorite part of the story, because he was trying to spook people. They said they were not scared, but they really were frightened. My favorite character is Adam. He lied to his parents three times early in the story. Later on, he ended up telling the truth. He reminds me of one of my friends that I play hockey with. This is just like the book Fake Mustache because they both tell lies. I have read Melonhead and the Big Stink, which is also funny. This is one of my favorite books because it is fun to read and it is a Florida Sunshine State Reader.

In conclusion this is a perfect book and I recommend it for kids 7 years old and older. If you like to read comedy books, go to the library and get this one. It is a fun book to read about kids our age and the stuff that happens to them.