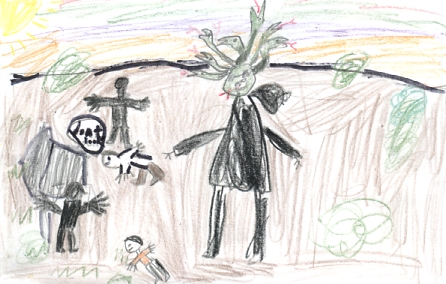 Can you imagine learning that you’re a whole other thing than a regular human? Well, Percy Jackson is the main character of this book and has been kicked out of a lot of schools. His best friend is Grover. Percy goes on a trip with his mom and they get chased by something big. Percy finds out he is a half-blood – part human, part god. He fought a monster in school, but this is the least of his problems. Read the book to find out what happens next.

I thought this book was adventurous because the main character, Percy Jackson kept going from one place to another. I felt interested because it mainly to me didn’t stop. The official order of the Percy Jackson and the Last Olympian series, it starts with:

1. The Lightning Thief 2. The Sea of Monsters 3. The Titans Curse 4. The Battle of the Labyrinth 5. The Last Olympian

Percy is my favorite character because he does so many adventurous things.

It is good for pictures in your head. It’s good for any age. Your dad, mom or older sibling can read this book to you before you fall asleep or any time of day. They could be interested in the book, too. The Lightning Thief is a mythical and adventurous book. There’s a lot of God’s and monsters. One of the monsters is Medusa. This is only book one, of the great series Percy Jackson and the Last Olympian.

B.G.
is a student in
Ms. Schock's 3rd Grade Class