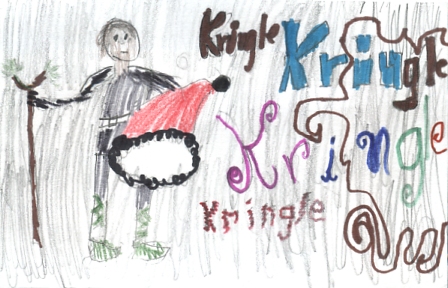 Kringle is an amazing kid and this is his story. Kringle is a boy whose caretaker, Merwin got taken away by the goblins. After that Kringle went on a journey to find Merwin. On his journey, he took a rest for the night but he woke up after an hour and there was a red hat with a white nub right in-front of him. He started walking and he saw a little doll. He went to get it and it started talking. It was an Elf and behind the Elf there was a wagon being poled by two sheep. In the wagon there were four more elves in it. They said they’d take him to their home, The Elvenwald. On the way to Elvenwald, Kringle couldn’t sleep for hours. All of the elves were really nice. They gave him food, clothing, and a bed. Later in the book Kringle is trying to get the runes back from the goblins. The runes are magical stones that the goblins are using to do bad things. The runes are originally the elves. Kringle gets one of the three runes and they only work if you have all three.

My favorite character is Kringle, I like him because he had a goal and he never gave up till he did it. I loved this book because it was action packed and had a lot of characters. I like how the author wrote the book because he made it sound like you’re watching the things happen. My favorite part is when Kringle gathered all the people he could to go to war against the goblins.

I recommend this book to people who like books with action, sadness and caring. This book is for people in third through sixth grade. Have a fun time reading it!

A.R.
is a student in
Ms. Schock's 3rd Grade Class