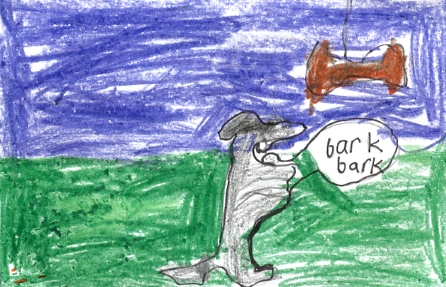 If you like dogs, then you chose the right book! How to Steal a Dog is about a girl named Georgina and a boy named Toby who lived in a car because they got kicked out of their apartment. Then, their mom was working two jobs. Later that night Georgina saw a sign that said “Lost Dog” and that gave Georgina an idea. It was to steal a dog and get the reward money, and that’s when she met someone named Carmella. Carmella had a dog named Willy who she really loved. When Georgina stole Carmella’s dog, she felt very guilty and went back and forth about her decision. Finally, at the end, Georgina had to tell Carmella something, and you’re going to have to read the book to find out if she was honest or not!

My favorite part of the book is when Georgina stole the dog from Carmella, who really loved her dog. That reminds me of something in my life. Another family bought my dog named Honey, and that was a very sad day for me. I liked the book because the ending was very good for Georgina, Toby, Carmella, and Willy. This made me feel happy because they finally got something they always wanted!

I recommend this book to kids who really like dogs and adventures. If you like this book by Barbara O’ Connor, then I think you might like her other book called Fame and Glory in Freedom Georgia. Her writing style is detailed because you really feel how the characters Toby and Georgina are feeling. They feel a lot of pressure but then they end up making the right decision in the end. I rate this book 4 start out of 5!

J.W.
is a student in
Ms. Lyle's 3rd Grade Class