On the Field with Derek Jeter

On the Field with Derek Jeter 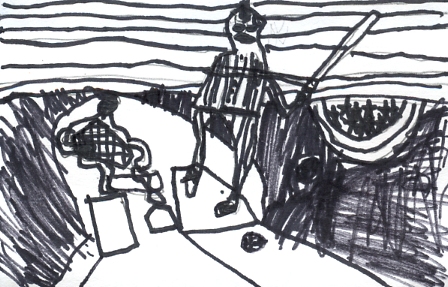 The book tells about Derek Jeter’s life. He spent most of his life living all over the country. Jeter loved to play baseball. Everyone in the town knew Jeter. His dream was to be the shortstop of the New York Yankees. Jeter’s dad told him “there are people better than you, but there is no excuse for someone to work harder then you.” I think that is a very good comment because it made Jeter work harder. His best batting average was .550 in high school. In 2003, his batting average was .324 playing for the New York Yankees. His batting average in 2007 was .317. You need to read the story to see what happens next in the book On the Field with Derek Jeter. “Go New York Yankees!”

I like the book because it is a lot of fun to read. The book is fun because it tells you what his batting average was. Some things I like was the book was full of advice and comments made by Jeter’s family and friends. One of the comments was” there might be people better than you, but there is no excuse for someone working harder than you”. That means if you work hard enough, you can be better than the person. I chose the book because my favorite baseball player is Derek Jeter and I like the Yankees. I wanted to learn more about Derek Jeter.

I recommend this biography if you like the Yankees. If you like this book you will like Matt Christopher in this series. I think this book is good for ages 8-12. If you like Derek Jeter this is a perfect fit for you. This is a very good book and I think you should read it especially if you like to play sports. You might find this book interesting because his life might be a lot different than your life growing up.

P.D.
is a student in
Ms. Schock's 3rd Grade Class