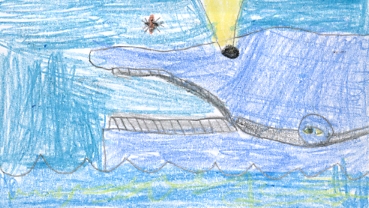 There was once a grouchy ladybug who met a nice ladybug. She said “Good Morning.” He said “Go Away!” He would always run into different animals like a yellow jacket, stag beetle, praying mantis, and a sparrow. He asked the animals if they wanted to fight him and when they said no, he would say, “Oh, you’re not big enough.”

I liked the story because it was funny when the grouchy ladybug runs into the animals. My favorite part of the story is when he meets the different animals. I like this part because the grouchy ladybug acts like a bully to animals that are a lot bigger than him and flies off saying "Oh, you're not big enough." Eric Carle used warm colors in his illustrations to make the story great.

I recommend this book to everyone. The people who would like this book the most are those who like funny stories. I think this is a really cool book.