Katie Kazoo Switcheroo Anyone But Me

Katie Kazoo Switcheroo Anyone But Me 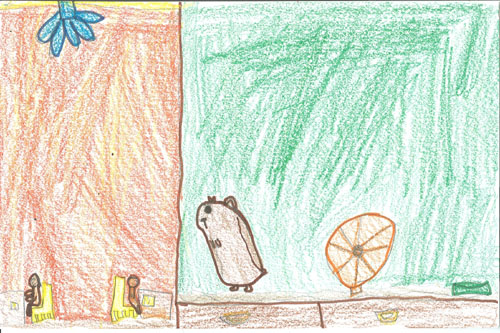 I met Katie in a book called Katie Kazoo Switcheroo Anyone But Me . Katie gets bullied by George, a new kid in school. Katie tries not to cry when George bothers her and sometimes her friends try to help her. But nothing works! Katie wants to be anyone but her! That night she makes a wish but doesn’t realize she wishes as a shooting star passes across the night sky. The next morning she woke up. She wanted to be late for school because of George. She looked inside the classroom nervously when all of a sudden wind started blowing just around her and then, she became a hamster! Katie couldn’t believe it! Will this solve her problem with George? Will Katie ever become human again?

I would recommend this book to anyone who has ever had to deal with a bully. When George got scared of the hamster in the classroom, he jumped on the teacher’s desk. George was embarrassed that all the kids in his class saw him scream over a hamster. That hamster was really Katie. I like the way Katie helped George realize that making fun of others and embarrassing them is not a good thing to do.