A to Z Mysteries, The Haunted Hotel

A to Z Mysteries, The Haunted Hotel 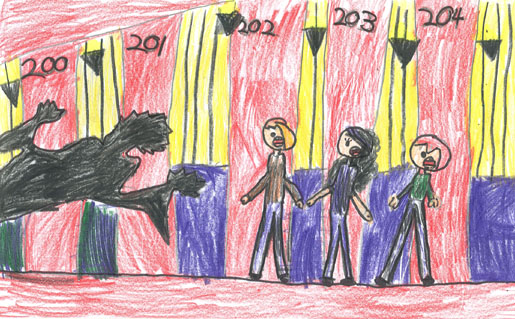 My favorite character is Ruth Rose because she likes to wear one color on all of her clothes even her shoes and head band. I also like her because she’s smart and solves almost every mystery in all of the books. Another thing I like about her is she has a good eye and notices almost everything. This book is in the A to Z Mysteries series. In the series the characters never change and they are Dink, Josh and Ruth Rose. Also, in all of the books there is a mystery to solve and Dink, Josh and Ruth Rose solve them. In this book I like the illustrations because they show what’s happening. Once it said, “Ruth Rose plucked a hair from the door frame. Dink examined the hair.” The illustration was a close up on Ruth Rose and Dink’s faces with Ruth Rose holding the hair. I like the illustrations because of how the illustrator draws the expressions. When someone’s scared it shows that they are scared.