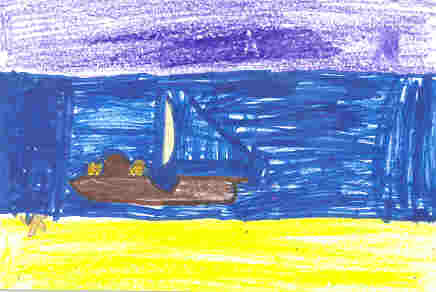 Do you like to read travel books? If you do, Turtle in Paradise is the perfect book to read by Jennifer Holm.

To begin with, this book is about a girl named Turtle visiting a new neighborhood where she goes to live with her aunt. She meets three boys named Beans, Buddy, and Pork Chop. They treat Turtle meanly because she is a girl. The boys have a club named the Diaper Gang because they babysit. They have a special powder that gets rid of diaper rashes. In a few days, they get to know Turtle and they allow her to come in the gang. Suddenly, Beans mom calls to give there grandma lunch. Turtle brings the lunch but the grandma knocked it over when Turtle left because it made her upset. But after they meet a few times, they like each other. Then, turtle finds a coin that leads to a treasure. Turtle tells Beans and they steal a boat owned by a man named Johnny Cakes. They dig in the spot the treasure was supposed to be in, but it wasn’t there. Then Buddy trips over the treasure spot and it is filled with gold. Then out of nowhere, a hurricane started and they were stuck. After a while, their parents find them and take them home. They made the newspapers, and the treasure was worth twenty thousand dollars.

In addition, I enjoyed this book because it had many funny parts. I like the part when Turtle tricks the ice cream man to give her free ice cream. I wish I could trick the ice cream man and get free ice cream too! I also like when Turtle brings grandma lunch because she always knocks it over. This was funny because all grandma would do was read magazines. It made me laugh that she didn't want to eat. Also, I like when they are stuck in the shack and they sing a Shirley Temple song. They didn't even like Shirley Temple songs, but they sang them to be funny. This made me laugh a lot.

In conclusion, if you like to travel, they I say go check out Turtle in Paradise. I recommend that you read it if you are a boy or girl 8-15 years old.