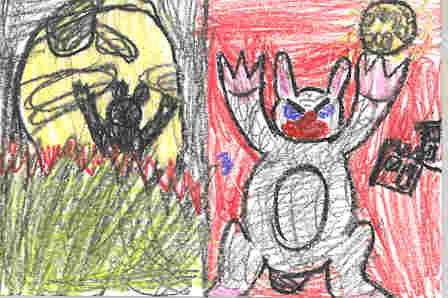 Do you like books with aliens? Then read The Attack of the Fluffy Bunnies by Andrea Beaty.

To begin with, this book starts on a marshmallow planet far away were Fluffs live. They are giant bunnies. Their planet was burning down so they got in a space ship and crashed on Earth! Three fluffs were on the space ship. Then, the characters Luck and his sister found the space ship! They went deep into the forest and saw camp What’s it to You.

In addition, soon the Fluffs start to kill the adults at camp What’s It to You! Then the Fluffs go to a space station and make everyone obey them with their swirly mind control eyes! Soon Luck and his sister find the space station and make a plan to stop the Fluffs from eating every ones brains. This is my favorite part of the book because it had the most action. I also liked how the characters in the story made a trap to capture the Fluffs and save everyone because they were the heroes. Finally, I thought this was a silly book for many reasons but especially because the Fluffs were allergic to tomato sauce! That was funny!

In conclusion, this book is good for at home or school. It’s also in your local library and is great for people 5 and up.