Captain Underpants and the Revolting Revenge of the Radioactive Robo-Boxers

Captain Underpants and the Revolting Revenge of the Radioactive Robo-Boxers 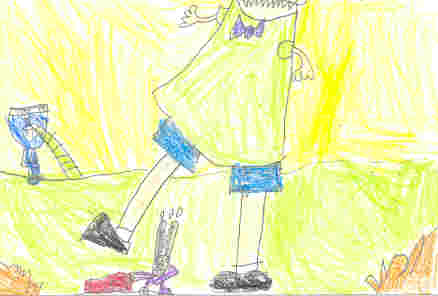 “Reading gives you superpowers!” Do you want superpowers? Well, then you should read Captain Underpants and the Revolting Revenge of the Radioactive Robo-boxers by Dav Pilkey. It will blow your pants off.

To begin with, this book is about when Tippy destroyed the world by going back in time. This really scared Kipper and his three friends. Then Mr. Krupp was fired a few weeks later by the “superintendant.” So if Mr. Krupp was fired five years ago then George and Harold did not hypnotize him. But now there was no Captain Underpants so who will save the world? Beats me. So Tippy went back in time ten minutes before he scared Kipper and his three friends. Then he froze them with the Freezy Beam 4000 and then waited for the Tippy who was slightly younger than him so he does not scare the three thugs. There is so much action in this book, it will keep you looking for more!

In addition, my favorite part of the book is how George and Harold like to make comics. This book reminds me of when I write comics that are like George and Harold. I also sell them for twenty five cents for people to practice reading. This connects because we both make a lot of comics and sell them on a playground. But I sell them at home where it is really safe.

In conclusion, This book is good for ages 4 to 19 because it is funny! I hope you check it out today!