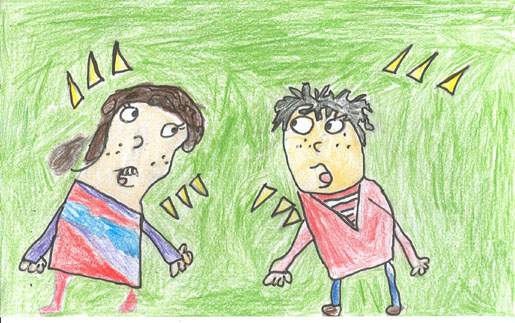 In the book, Mayor Hubble is in Trouble, I liked when A.J insulted the ferret. I liked it because he said, ‘’I hate ferrets!” and also said, “You’re a dumb head.” I thought both were funny. But I did not like it when A.J. and Andrea played hardball like when Andrea wrote mean things about A.J. Then A.J looked in her diary. I thought they were both being mean. I liked the pictures in this book, how they express the characters’ feelings. My favorite characters are A.J. and Alexia. I like A.J. and Alexia because Alexia likes to ride her skateboard and I like to ride my skateboard, too. A.J. is my favorite character because he is funny. My favorite part is when A.J., Ryan, Alexia and Mayor Hubble and his other friends go to their secret hiding place.