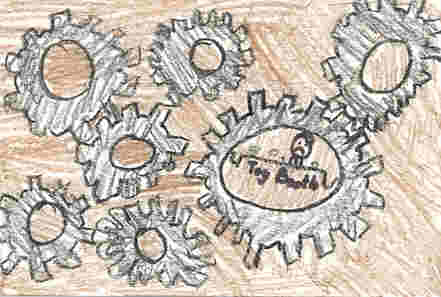 Try to imagine living off of stealing things and working on clocks. If you can you should read The Invention of Hugo Cabaret by Brian Selznick.

To begin with, this book is about Hugo who is a boy that works on clocks. He thinks working on clocks can be peaceful. When he is working on clocks he looks through the clocks because he works behind the face of the clocks and he can see lots of things, even the mean old man. That man owns the toy booth where Hugo stole toys because he needed the parts for his clocks. But he didn’t just walk to the toy booth, he had to be careful so he went through walls, up ladders, and through air vents. But as he did that he had to watch out for the station inspector in the green suit. Hugo only took the toys for the automaton which is a mechanical man. He had to know what the note said that the automaton wrote so he needed to fix him.

In addition, Hugo starts to steal another toy but gets caught and the man grabs him. As he tries to unleash himself his "How to Make an Automaton" his father gave him as a birthday present falls out of his pocket. The man grabbed it right before Hugo and he twisted and turned to get it, but he stopped because the man threated to burn the book. This was my favorite part of the book because it had the most action. I also like this book because Hugo is a very daring and adventurous character. Finally, this is one of my favorite books because it is a chapter book that still has many pictures. It has over 500 pages, but it is still not that hard to read because there are so many pictures!

In conclusion, now it is up to you to read this book and then part two! It is also good for all kids ages eight to twelve. A parent is good to read it to you.