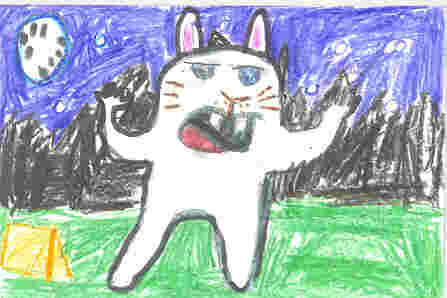 To begin with, this story was about twins who are trying to save Camp Whatsittoya by Lake Whatssosmelly from the fluffs (fierce, large, ugly, and ferocious furballs). The twins are named Kevin and Joules. Their parents go to a spam convention so the twins go to Camp Whatsittoya. My favorite part is the first meal. They have tube steak (hot dogs). They saw lots of weird things and met lots of bizarre people. I thought that was hilarious!

In addition, I enjoyed this book because I like adventure and humor. In the story the twins have to fight off bunnies a lot of times. I have to fight off my brother, sometimes he looks like a rabbit. I like playing with my family. In the book everything the twins did they did it together. At my camp, I barely saw my brother. Only at meals and very rarely I passed him.

In conclusion, this book is perfect for everyone ages eight and older. I also think this is a great book for teachers to read out loud. Well what are you waiting for? Go and buy it!