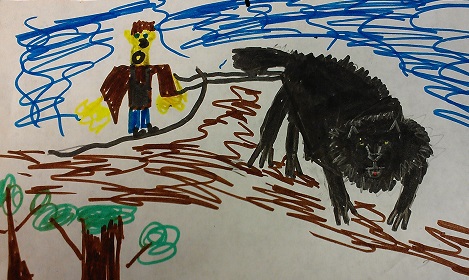 Once there was a farm in Wyoming. On the farm there lived a grandfather, a boy, and a dog. The boys name was Little Willy He was ten years old. One day Little Willy found out that his grand father was sick. Little Willy ran to Doc Smith's house and told her everything that had happened. Doc Smith got over to Little Willy's farm very quickly. Doc Smith started to examine Grandfather. Little Willy was really sad. "I can't take care of the farm by myself!" said Little Willy. Little Willy needed to pay the taxes, so he sold some potatoes but he didn't get enough money. He needed 500 hundred dollars. He had 50 dollars in his savings account for college, but it was still not enough money. Then he saw it. The race was a very big race and the prize money was $500, but to get into the race he had to pay $50. There were more people entering the race and one was named Stone Fox. He had never lost a race, but Little Willy was not scared. The day of the race Little Willy was determined to win the race. Then the race started. You'll have to read the book to find out who wins.

My favorite part of this story is when Little Willy saw Grandfather in the window during the race, because it gives hope that Grandfather is alive. The character that is named Stone Fox was a tough Indian. He changed because he helped Little Willy do something amazing. I felt sad at the end of the book because someone got badly hurt.