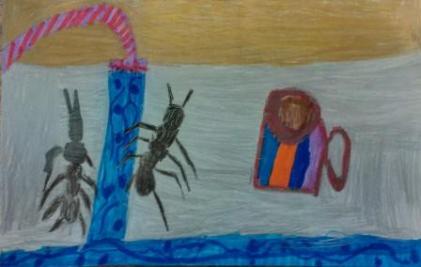 One dark night two ants found a pot of glittering treasure. It was like a pool of paradise and crystals. All of the sudden they felt cold and were getting lifted up. Suddenly they were getting dropped into an ocean of black coffee. Then they darted out into something really hot. They were in a toaster. Then they were shot out of the toaster onto the sink and sucked down into the drain and found themselves in a garbage disposal.

I like Two Bad Ants because it has a mystery. The mystery is: do the ants go back to the house everyday? I like the part when the ants stay at the house because they loved the crystals and were going to eat them forever. The ants made a bad choice to stay behind because they almost got killed. When the rest of the ants come back, the two ants went with them because they didn't want to get hurt again.

I think you should read Two Bad Ants because it tells about a lesson. The lesson was that the ants would probably not stay by themselves at the house again because they almost got killed. It is basically saying that you could learn a lesson too. So now you know Two Bad Ants is a good book.