The Hero and the Crown

The Hero and the Crown 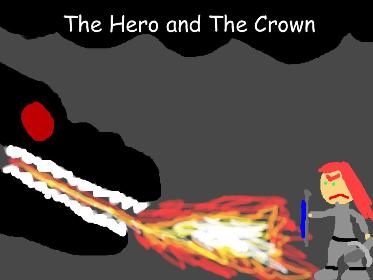 This story is about a girl named Aerin, the daughter of the King of a land called Damar. She has none of the royal blood (or they think). This has been proven when her half-sister, Galanna, dared her to eat a magical leaf that only the royal bloods could eat without getting sick. Aerin ate some of the leaf and became very sick. While she was sick, she snuck out of her bedroom a few times and went outside to visit her horse, Talat. One time when she snuck out of her room, she went to the library and found a memo on a potion that made you immune to dragonfire. As soon as she found out about this ointment, she started working on it because she wanted to fight dragons and prove that she was useful. Unfortunately, this potion took her two years to make. When the potion was FINALLY done, Aerin set out to face her first dragon. The two she faced were tougher to handle than she expected. When the dragons were defeated, Aerin brought the heads to the castle. When she got to the castle, the king made her a part of his army. Then she and the rest of the army go to face the evil dragon, Maur. What will happen next? Will the ointment work? IS THERE MORE THAN ONE ENEMY TO FACE??? You have to find out by reading! MWAHAHAHAHAHAHAHAHA!!!!

Even though I am NOT- repeat- NOT- finished with this book, I have found it very interesting in some points--- while at some points, it will bore you to sleep (Ex: pgs. 1-35). The first 100 pages is an intro, so that part may be boring. Once you are past the first part, it gets really exciting, like when Aerin was battling Maur. It seemed pretty scary to me. I have also found this book very exciting. So from my point of view, only read this if you are prepared for a boring start and a "bang!" finish.

I recommend this book to those fantasy lovers. This book will take you to a world you've never seen before.