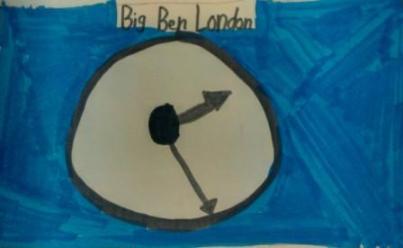 In the beginning Margaret and Ben were playing baseball out in the field. When they got back they had to study for the geography test. When Ben was studying he fell asleep. His dream was marvelous. He traveled around the world. He floated to the Great Wall of China and to London. When he woke up Margaret was at the window saying, "Ben, wake up!" When Ben woke up they played baseball again.

I liked Ben's Dream because most of the pages are just pictures. That kind of leaves a mystery because it makes the reader wonder, "why is he passing these places?" My favorite part was when Ben fell asleep and had his mysterious dream. It was the best part because it was a way to help Ben study. Ben reminds me of myself because sometimes when I study I do not focus. Ben changed because after his dream he knew all about the places he passed in his dream, which helped him study.

I think you should read this book because it is very weird when he passes the famous places. This is the best Chris Van Allsburg book I have read so far. If you are someone who likes to study it would be a good book for you, and this book is good for people who have mysterious dreams. Now I hope you read this book. Last but not least, my question. Why was Ben acting up after his dream?