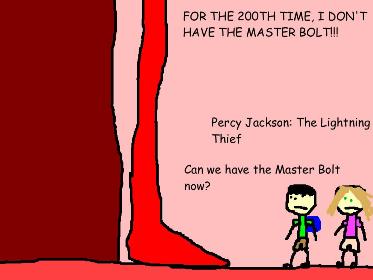 One day, on a field trip from Yancy Academy, the hero, Percy's algebra teacher, Mrs. Dodds, turns into a monster. (They call this one a fury.) But Percy defeats her with the help of a pen sword that Mr. Brunner (another teacher) gives him. Soon after that, Percy is expelled. He then finds out that he's a half-blood demigod and goes to camp halfblood for protection from monsters. Then, as if things weren't bad enough, he finds out that he's the son of Posiedon, the water god. One of the "Big Three"! And that"s really bad. It's a long story that you can read in the book. He also finds out that Zeus,the air god, lost his symbol of power, the Master Bolt, and he blames Percy. Now Percy has to find out who stole the Master Bolt. He thinks Hades, ruler of the Underworld, stole it. So he starts to travel to the Underworld when Ares, the war god, gives Percy a backpack with a special something in it. Who stole the Master Bolt? What else is there to find? You'll have to read the book to find out!

I really loved this book. It was one of the best books I've ever read. It totally caught me off gaurd when I saw who stole the Master Bolt! Also, this book is unlike any other book I've ever read. You have to expect the unexpected to predict who does what. It's a really good book and there are more in the series if you end up liking the book like I did!

I would recommend this book to high-level readers. It has a lot of challenging words and multiple plot lines. Still, it's a really interesting story and I think you should buy it as soon as possible! Although, I forget how much it costs.........