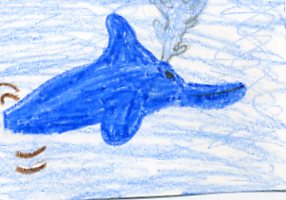 One day a boy named Sawyer was on his way to school he sees a dolphin in the sea caught in wire so he takes out his pocket knife and cuts the wire off of the dolphin. Soon, people from the nearby marine hospital came to rescue the dolphin. After school, Sawyer sneaks into the marine hospital and bumps into a girl named Hazel. Hazel's dad, Dr. Clay, is the head of the hospital. Hazel takes Sawyer to the dolphin that they named Winter. Then, Sawyer, Hazel and Dr. Clay become very good friends. However, they are sad to find out that they might have to cut off Winter's tale will she ever get better?

Our favorite part was when Hazel took Sawyer's helicopter and flew it too high and it broke. We liked that part because it was funny.

Our favorite character was Hazel because she’s mischievous and funny because she broke Sawyer's helicopter.

We like the illustrations because they were different than other stories. For example, there were photos of the scenes from the movie. We would want to be friends with Hazel because she cares about Winter so she might care about us.

People who like realistic fiction and who care about animals, especially dolphins, should read this book. We recommend it if you are anywhere from 8 through 11 years old.

Leah B. and Lexi R.
are students in
Mrs. Mantie's K-6th Grade Class