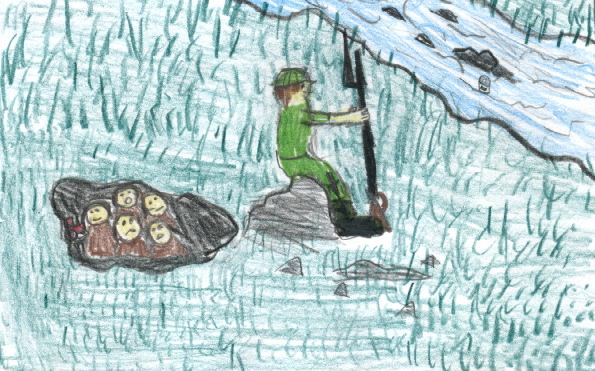 In 1944, twenty boys and girls were put together in a classroom for safety while France was occupied. One day a strange man came into the classroom and spoke to the children about the Germans occupying France. The man said some Jewish children didn’t have a place to go and if the Nazis find them, the children will die. The man asked the children if they could hide the ten Jewish boys and girls because their parents had been killed.

The food supply was low, so a few children went down to the river where some food was hidden. One of the children fell into an underground cave. The children looked at the cave and thought it would be big enough to hold 15 children to hide from the Nazis. The Nazis were in the area so the children went to live in the cave with little food and water to live on.

When I read about the man that came to the school, I wondered if he was really a German and wanted to see if they would hide the Jewish boys and girls.

I felt sad for the children to be without any parents. I wondered how long they would be hiding in the cave and if they would have enough supplies.

My favorite part was when the Nazis had to leave for the Normandy front. The hidden children were rescued from the cave by a ladder and taken back to the school house, safe from the Nazis.

I liked the book because it had to do with historical events. It told about events of children who lived during WWII.

I recommend this book for boys because it has to do with periods in world war II, and they can get an idea of what it was like for the Jewish people. Pretty much anybody above third grade could read it easily.

R.Z.
is a student in
Mrs. Daoust's 6th Grade Class