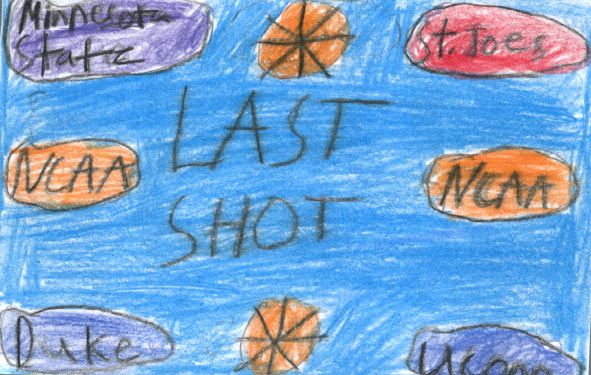 Main characters Stevie and Susan overhear Thomas Whiting telling Minnesota State star player Chip Graber to lose the championship game or else…. Whiting threatens that he will turn in a fake report card into the NCAA with F’s on it, so Chip will get in trouble and the team will be stripped of all its wins. He also threatens to get Chip’s dad fired. Stevie and Susan try to get to Chip. They have trouble getting through the security guards, but they eventually get to see him. Then they have to talk to other people that they trust who will believe them and not think they’re crazy.

When I was reading, I felt surprised that Stevie and Susan actually wanted to help Chip because they would have needed a lot of evidence that they heard the conversation. I got mad when I read what Whiting said to Chip about losing the game of purpose because both of them will remember that for the rest of their lives.

I wonder what I would have done if I was told to lose a game on purpose. I think I would tell someone right away.

My favorite character is Stevie because he wants everything to be right. He wants to help Chip because he knows it is the right thing to do. Stevie is a loyal character and friend.

My favorite part of the book was when Chip made the choice to win the game. I wasn’t sure what he was going to do because it was a tough decision. His three pointer won the game and the FBI took Whiting to jail.

I recommend this book because it’s about mystery and sports and I know a lot of people that like both of those. Also, John Feinstein never made me want to put the book down because there were no boring parts. If you like Stevie and Susan, they are the main characters in other books, Cover Up and The Rivalry, by Feinstein.