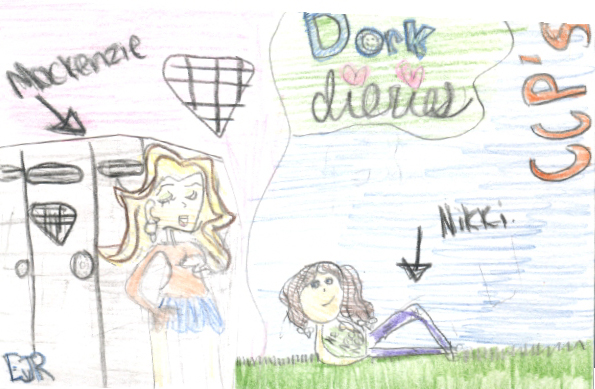 Nikki Maxwell has just moved to a new school, and she is facing some major problems, like Mackenzie and the CCPs (cute cool popular) girls that constantly bully her and call her a big dork. And has a new crush, Brandon, one of the most popular boys in the school. How will she ever survive this horrible place?

Well, Nikki has her diary, but no one may read it. It is for her eyes only, but the readers can see her diary. While Nikki is having trouble at school, she has even more trouble at home with her mixed-up family. Nikki thinks she is not going to survive all of this madness, but luckily, she does, and she even has friend to help.

In this book by Rachel Renne’ Russell, you will uncover how Nikki J. Maxwell feels about her new school, Mackenzie, her crush on Brandon, and what exactly happens to a dork like her.

Dork Diaries is written in a style similar to Diary of a Wimpy Kid. Russell has the same special creativity as Kinney. The illustrations also reminded my of Diary of a Wimpy Kid because they both use stick figures and air bubbles to represent talking. Like Kinney, Russell uses big words like SPLAT! for noises. The pictures in both books were childish cartoons.

I did not like Mackenzie. I thought that she was going to become nice, but, she unfortunately never did. She always was being mean to Nikki because she did not have the right clothes or the right shoes or anything Mackenzie liked.

I think that Nikki was like Greg in Diary of a Wimpy Kid because they both were bullied and they were not afraid to be different and take risks in Middle school. Out of the whole book, I liked Nikki, but she was a scaredy cat when it came to getting in trouble. She was always like, “Don’t do that” and “Dad, please, someone might she me.” She was embarrassed by her family, too.

My favorite part was when Nikki and her friends Zoe and Chloe went to the dance and Nikki got to dance with her crush, Brandon. This was important because Mackenzie liked him and he chose Nikki over her.

If you are looking for more of this series, there is a second and third book. I recommend Dork Diaries to girls most likely because it is really girly. It would probably be best for ages eight and up.