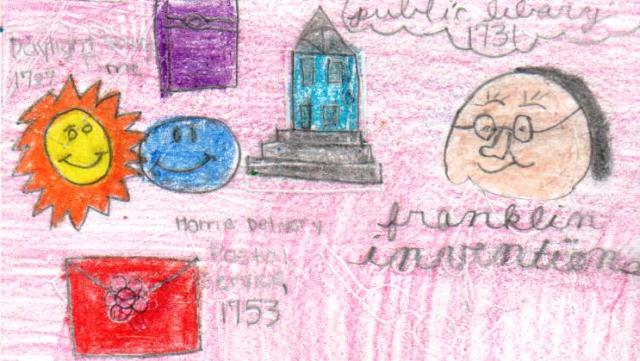 This book is about Benjamin Franklin and his inventions. Benjamin’s inventions made our world safer and more interesting. One of his inventions was the power of electricity. Benjamin attached a small metal wire to a top of a kite and gathered electricity from a storm cloud. He also created flippers to move faster in the water. He accepted the benefits of vitamin C. Now chairs come in all sizes because Ben designed two chairs that are still very useful. Everyone has seen a rocking chair, but not many others have seen Dr. Franklin’s rocking chair. He invented a rocking chair with a fan on top and one that churned butter. Now our newspaper is filled with pictures because Ben was the first to print a political cartoon in America. Now almost every large city includes a Library, Hospital, a post office, a fire department and a sanitation department. Ben established these and many more!

My favorite part of this book is when Ben helped make a hospital and a post office and many other inventions. The character that I find interesting was Ben because I think it was cool that he started inventing when he was a kid and that his things were very useful to use. Yellow, blue, red, and all kinds of colors were used in the illustration to help me better picture in my mind his amazing creations.

CA
is a student in
Mr. Fulton's 4th-5th Grade Class