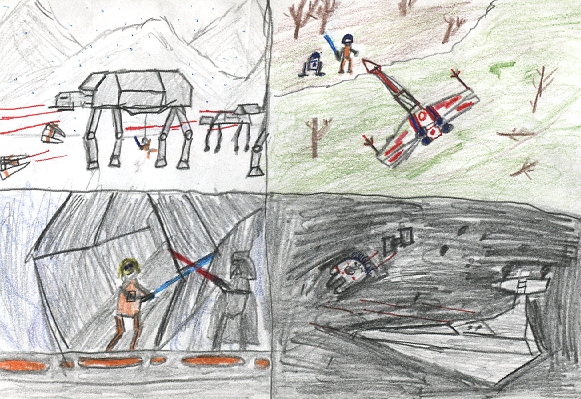 From The Millennium Falcoln to deadly At-At Walkers attacking Hoth, this thrill packed book tells the whole story of Star Wars Empire Strikes Back. Luke Skywalker tracks down a probe droid which leads him to a vicious wampa. He returns to Hoth where At-At walkers are ready to attack. They attack and Luke escapes to Dougabah where Yoda, (A great Jedi warrior) lives.

Meanwhile, Han Solo drives to Besbin to get his hyperdrive fixed. He goes into the waiting room where Darth Vader waits to capture him.

On Dougabah, Luke finishes his training and heads off to Besbin to meet Han, who is now frozen in carbonite. Luke flies to Besbin and when he walks in, Darth Vader greets him with his light saber.

A bloody battle follows where Luke gets his hand cut off. They return to the Nebulun B where they ponder an uncertain future.

My favorite character is Chewbacca because he is furry looking and really nice. He helps Hans Solo repair the Millenium Falcon. Although he doesn't talk, he utters his sounds through a growl.

I like how the author creates his writing style. He goes from one scene in the story to another easily and the characters are always in different places. I am not sure why the author put all of the pictures in the middle of the story. I guess he was trying to tell the story over again, but only with pictures.

R.Z.
is a student in
Mrs. Daoust's 6th Grade Class