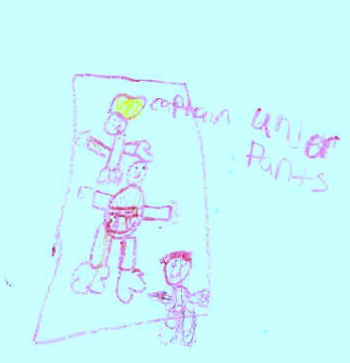 One day, there were two boys named George and Harold who hypnotized their principal, Mr. Krupp, and whenever you snap your fingers, Mr. Krupp turns into Captain Underpants. A boy named Melvin got straight A’s. George and Harold put up a sign that said “PLEASE WASH YOUR HANDS IN THE TOILET” and Melvin washed his hands in the toilet. Everybody in Ms. Ribble’s fourth grade class had to give an oral report demonstrating how to do something. George and Harold made a demonstration of Squishies. A Squishy is when you put two ketchup packets on a toilet seat and you squish the toilet seat and then ketchup comes out of the ketchup packets. Almost all the students liked Squishies, but Melvin didn’t like it.