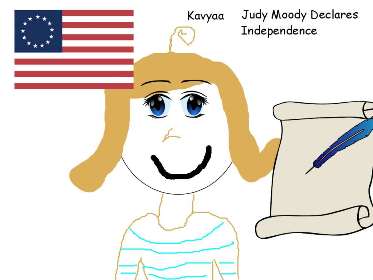 Judy was in Boston, Massachusetts. When she went on the ship where the Boston tea party was she met a girl from England named Tori. When Judy went home she made her own Declaration of Independence. Will Judy's parents let her have independence? Find out by reading this book.

I like this book because it was very interesting. I thought it was interesting that she wrote her own Declaration of Independence to her parents. I think it would be funny to give your parents a Declaration and see what they say to you. My favorite part was when Judy did her report as a play. I liked this part because it was very funny. The illustrations were neat. This book is part of a series. It is very simmilar to the other books in the series because it has the same characters.

I would recommend this book to 3rd and 4th graders. You will be crack up when you read this book.

Kavyaa P.
is a student in
Mrs. Brosnan's Book Club