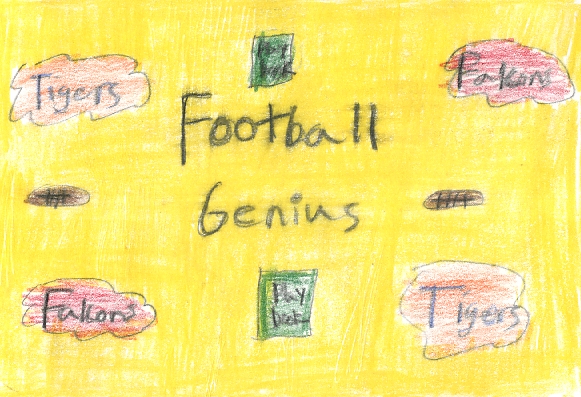 In Football Genius, by Tim Green. the main character is Troy White, a backup quarterback for the Tigers. He is a backup even though he is a much better quarterback than the team’s starter. He can predict the other team’s plays and he doesn’t have a trick; he just knows. His mom (Tessa) got a job for the Atlanta Falcons in public relations. Troy went to the Falcons vs. Cowboys game. He tried to tell the Assistant coach the plays the Cowboys were going to run, but Coach Krock just pushed him down, and security took Troy away.

I think one of the reasons why Coach Krock pushed Troy down is because he thought he was the best coach and didn’t want to listen to anyone else. If I was a coach, and our team was losing a lot, I would take advice from anyone if it were reasonable. And if didn’t work the first couple of times, then I wouldn’t use it.

My favorite character in the book was Troy. Every time people said he couldn't do something, like be the starting quarterback or predict plays, he did. He never gave up.

In the rest of the book, you will learn about Troy’s phenomenal gift, along with a couple of surprises. Hint..coaches may have to worry about their jobs.

I recommend Football Genius, because I really like this author’s style; he never has any boring parts. It makes me never want to put the book down. I also like Troy, because he never quit trying in football, or trying to help the Falcons win, no matter what happened.