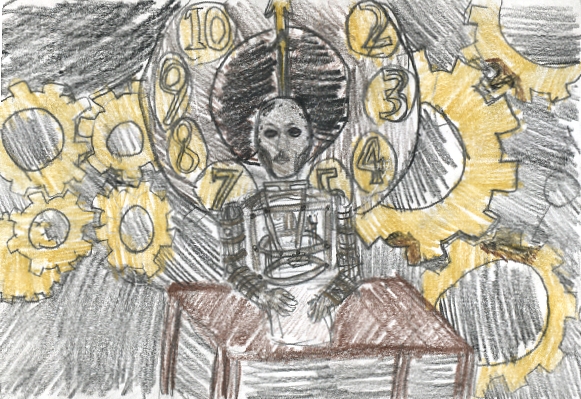 Hugo Cabret is a book about a boy who lives in a train station after his parents die. He fixes and winds the clocks at the train station. He lives in secret and sees the world through the grates on the train station walls. Hugo is a very good thief. He steals paychecks that you will find out actually belong to him. He piles them up in his room.$100,000 dollars could be there. He also steals food from the train station vendors. Hugo is on constant vigilance for the station policeman who is notorious for putting parentless kids in the orphanage. Hugo also harbors an unsuspected companion, an automaton, that he and his father were longing to fix; Hugo still has the desire to fix it.

Hugo is one of my favorite books and one of the reasons is the illustrations. The illustrations are very slick and look like sketches. The drawings are a big part of the book and make you feel like you're almost watching a movie.

My favorite character is the old man because he has a really cool background story. He was a movie maker who made 100s of films and he was mad at the world because no one remembered his movies.

Some questions I had when reading were why does Hugo always talks about his father and never about his mother? I always wonder how old Hugo is because if he is young, he could be adopted easily.

Overall, I would recommend this book for people who like the genre of adventure and who can use the pictures to understand the book more deeply.