Gregor and the Code of Claw

Gregor and the Code of Claw 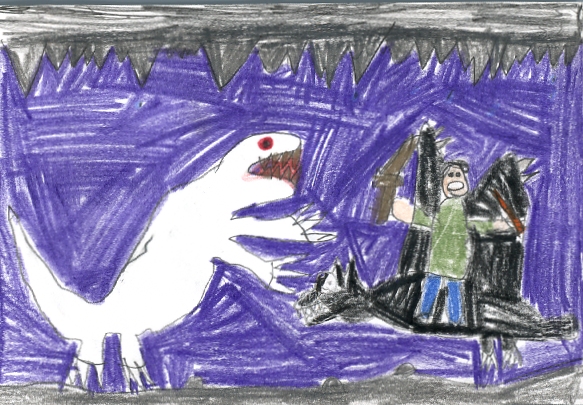 Two years ago Gregor chased his little sister Boots through the grate in the laundry room wall. They fall hundreds of miles under New York City to a place called the Underland. In the Underland people have purple eyes and albino skin. There are horse sized spiders, mice, ants, cockroaches, and bats the size of a fighter jet. Worst of all there are man-eating rats that want all humans dead, but there are some good rats like Ripred and Lapblood.

The Underlanders believe Gregor is the warrior who will help them win the war against the rats with his companion Ares. He is a huge, strong, stubborn, and menacing black bat. Gregor is sent on quests, including one to kill the Bane, a bus sized white rat predicted to destroy all of the Underlanders. When he first finds out that Bane is only a baby, he lets it live. Little does he know it grows up to lead the rats to decimate all of the Underland.

I liked all of the characters except Bane. Gregor cared a lot about his sister, but Bane was an evil character. He was ruthless and did not care about anything. He was coniving from the beginning of the book to the end.

I did not have a specific favorite part because I liked the whole book. I liked how the beginning explained what had happened to North America after war. I did like the ending because it was a cliffhangar that ended in suspense. I went on to read the next book, Catching Fire.

My reaction when I first read this book was ``WOW! `` I loved the book because it has something for everyone... fighting, romance, adventure, action, etc.

For people who have read The Hunger Games by this author, they would think this is also a good book.I recommend the book for kids over ten because there is some violence in it.

Dylan A.
is a student in
Mrs. Daoust's 6th Grade Class