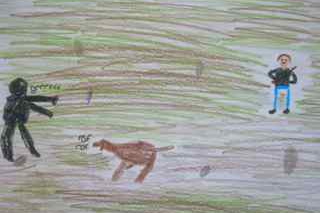 This is “Book One” of a three book series. The second book is called Irish Red and the third book is called Outlaw Red. They are all good books. They all take place in the Ozarks.

The book is about a teenager (Danny), his dad (Ross), and Big Red (the dog). Danny and Ross live in a clearing in the woods. Mr. Haggin lives a couple of miles away. He is a rich dog breeder and Danny likes one of his dogs (Big Red).

In one very exciting part, Danny and Big Red get face to face with “Old Majesty”. He is a big bear that everybody fears. Does anybody get hurt? Do they kill “Old Majesty”? You will find that out and many other things if you read the book.

It is a great book. They have lots of adventures and experiences with things in nature and with people. It has a lot of action and suspense. I recommend it to everybody of all ages. I also recommend these other dog books too: Irish Red (book two), Outlaw Red (book three), Stormy, Snow Dog, Where the Red Fern Grows, Old Yeller, Savage Sam (Old Yeller and Savage Sam are a series), and Sounder. Summer of the Monkeys is also a good book with a dog in it.