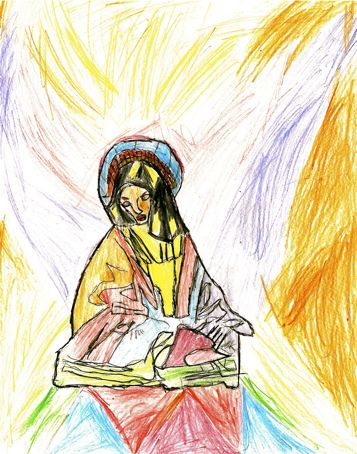 The book is about a selfish girl who’s life of ease was stripped away from her due to her own malicious deeds. One of her fatal flaws was acting like an Empress before she actually was one. Anna Comnena was a real princess of the Byzantine Empire who lived during the First Crusade. Even though this book is a work of fiction, the story in it is mostly true.

In the story, Anna, who is next in line for the throne, learns the skills she will need as Empress and more. She also learns that her wicked grandmother is the one really running the empire, which is a shock to her, because she thought that her father, the Emperor, had the real power. After Anna tries to expose her grandmother, her grandmother manipulates the Emperor into stripping Anna of her title and throne. Will she get it back or will her brother, John, win? Read this book and find out.

I liked Anna’s brother, John, because he was sly and cunning. For instance, he tricks his grandmother into making him Emperor, and then he forces her into retirement. John would do what ever it took to become Emperor, and I thought that was awesome. John wasn’t a good student, but when his father asked, he pretended that his studies were going well. Similarly, John let his grandmother believe that he was her puppet, but right when he became Emperor, he told her he would no longer be needing her assistance.

Another character I liked was Anna’s friend Sophia, because she was a good friend to Anna. Most of time when Anna got into trouble, Sophia found a way of bailing her out.

I hated Anna’s grandmother because she was always lying, and when she knew she wasn’t going to get what she wanted, she would just find a new person to manipulate. Anna’s grandmother would do anything to control the empire. She would even have someone taken off the throne. When the grandmother realized that Anna was not going to be her puppet, she convinced Anna’s father to make John the next heir.

I don’t think the author did a very good job at writing this book, because it takes about 150 pages before it starts to get interesting. I also didn’t like how whiny she made Anna, it seemed that all Anna did was complain about things that she herself caused. For instance, Anna did not do a very good job of waiting until she became Empress, and that’s why she didn’t become Empress. Also, after overhearing Anna’s plans to exile John and her grandmother, her grandmother told her father, the Emperor, that Anna didn’t deserve to be the Empress. The reason Anna did not become the Empress was because she was her own worst enemy. What annoyed me, was that she kept complaining about it and blaming other people.

I would recommend this book, but only to 5th grade and up, because the plot is complicated and kind of hard to understand.