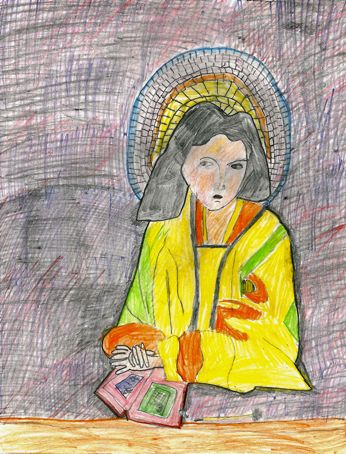 This book caught my attention when my teacher handed it to me for a class project.

This book is about Anna Comnena, Princess of Byzantium. At the beginning of the book, Anna is the heir to the throne, and her betrothed is Constantine Ducas, her mother’s cousin. Anna’s father, the emperor, is always away in battle, and his mother governs his empire when he is away. His mother also teaches Anna how to be an empress. Anna’s mother gives birth to a baby brother, John. When John grows up, Anna’s father gives the throne to John instead of her, because Anna said that when she became empress, she would have John exiled, and she wished he could be executed and blinded as well. This convinced her grandmother that Anna shouldn’t get the throne. So her grandmother convinced the emperor, too. Can Anna seize what is rightfully hers? You can find out for yourself when you read this book.

My favorite character is Anna, because she was the princess of one of the most rich and famous empires ever to exist. Although she was selfish, like only thinking about her future and no one else’s, she wrote a book about her father, and let the fiancé of one of her slaves stay at the palace.

Anna is always calling her baby brother a monkey, which I think is funny. This is probably mean towards John, but all John thinks about is himself, like when he tricked his grandmother into getting him the throne, and then banned her.

My least favorite part about this book is that Anna’s father gives the throne to John when she has been waiting for it ever since she was a young child, and it was promised to her. This to me was unfair towards Anna.

I think the most changed character was John. At first, John was a spoiled brat, an annoying little brother who would tell on Anna, but when he became emperor, he was a merciful brother, exiling Anna to a convent, instead of having her executed.