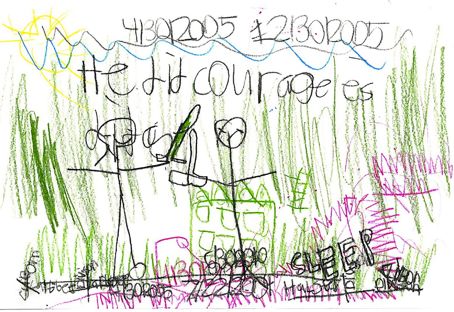 This story is about Perceval, a boy from England during the Medieval Times. He sees knights on horses and he wants to be a knight, so he goes to King Arthur's court. There he became a knight and he had lots of adventures. He did courageous deeds and saved people.

Perceval did not want to be a foolish person. He wanted the red armor and to be a really good knight. Gornemant, another knight, told him not to ask thousands of questions. At the Fisherman's house, he wonders about what is happening, but he can't ask questions. Later, a creature tells him that he should have asked questions, but because he didn't, everything will be destroyed. His uncle, a priest, also tells him that he should ask lots of questions, even if you think they are foolish. The priest said being the best knight ever is not the important thing, being foolish is okay if you are learning.

In the beginning Perceval is a foolish kid, then he becomes a knight. He is told not to ask thousand of questions, but then he is told by his uncle that he should ask questions. I'm guessing Perceval felt very turned around because of all the different things people told him.

While I was reading this book, I felt like I was glad I wasn't a knight, because it would be weird to have armor on. It would be really hard to follow orders of the king and other knights. I felt really bad for the red knight when he got stabbed in the eye.

There are decorations and beautiful paintings in this book. They are really nice and colorful art. I liked the flowers in the page decorations.

I would not recommend this book. I didn't like the rude words in it, like when Perceval was called a fool. But I liked the pictures, they were beautiful.

Jack H.
is a student in
CGS Freedom Readers!