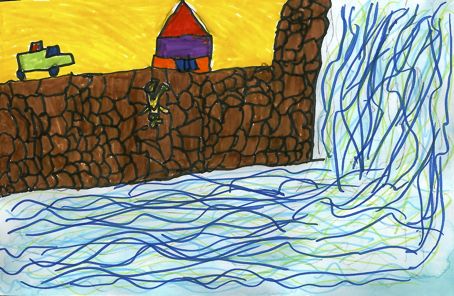 Remember the tsunami of 2005 that hit the coast and islands of Malaysia? Well, what you might not have known, is that the Malaysian government used the tsunami as an excuse to tear down beach villages and build fancy hotels. At least, that's the story in Shadow Wave.

Shadow Wave is the last book in the first CHERUB series. CHERUB is a secret organization that uses kids as secret agents to infiltrate drug gangs and other crime organizations in order to bring them down from the inside. Bad guys have used kids in crimes for a long time, but now a branch of MI5 is using them too. And it's working beautifully, only four agents have died since 1918.

James, a CHERUB agent, is assigned a mission to guard/babysit the children of Tan Abdul's, a Malaysian official. His friend, Kyle, a retired CHERUB agent, recognizes Tan Abdul's name, and recounts his encounter with Tan Abdul. He tells James that Tan Abdul is a really bad guy. James then declines the mission and goes on his own mission with Kyle to expose Tan Abdul's corruption to the world.

The story itself ends well, but this book was not a great end to a beautiful series. I would have liked the epilogue to have explained more about what happened to the characters. I like this series because it has teenage kids going up against corrupt politicians, gang leaders, and just overall bad people, and bringing them to justice. Robert Muchamore, as usual, captures your imagination right from the beginning, and you don't want to put the book down until it's done. The action scenes made you feel like you are there. They are very detailed with lots of descriptions. It's like watching a movie, except you are right in the thick of it.

One of the things I really like about this series is how the CHERUB agents are always getting in trouble. The kids in these books, even though their hearts are in the right place and they are the "good guys," don't always act "good". They are like real teenagers. For instance, the main character, James, is always having to serve some kind of punishment for breaking the rules - even serious ones. Another part I loved about this book and the series is the humor. Since Muchamore is a British author, it wasn't just American humor, but rather it was snarky British humor, which is always funny.

I recommend this book to people who like comedy and action all in one. If you have a chance to read this series, I suggest you start with the first book, The Recruit. If you read Shadow Wave without having read the previous books, you would be confused. I recommend readers be at least 12 years old to read these books due to swearing, references to alcohol, and some mature scenes.