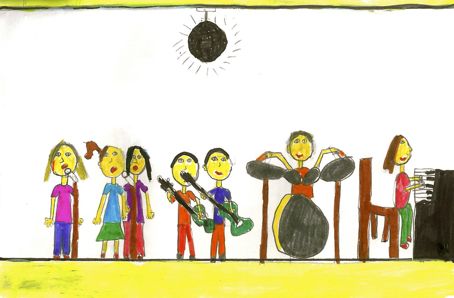 A normal diary of a dork would be about the boring life of a dork. That is what I was thinking when I saw this book, but when I started to read it, I was amazed to read an interesting life story of a dork.

This book is about a dork named Nikki Maxwell. Nikki goes to school called WCD Middle School on a scholarship because her father is the school’s exterminator. Nikki receives in the mail a tuition bill from her school and knows that her family can’t afford to pay it, so she keeps this a secret. A talent show is coming up, and one of the prizes is a scholarship to WCD. She and her two best friends, Chloe and Zoey, join as a band with four other people. You can find out for yourself if they win or lose and what happens next when you read this book.

My favorite character is Nikki because she had the guts to perform in a talent show in front of a big audience.

The name of Nikki’s band was supposed to be “Dorkalious”, but when it came time to fill out the form to participate in the talent show, Nikki didn’t know the name of the band yet because they had just joined as a band. So she put on line for the name of the band “Actually I’m Not Really Sure Yet”.

I felt sorry for Nikki because a mean girl named MacKenzie Hollister was so mean to Nikki and was always playing pranks on Nikki.

This book is in a series, but I don’t think you need to read the first two books to understand this one. You could to get more information, but it is not necessary.

I recommend this book to sixth graders because I think they would be amazed by the description of a dork’s life story as much as I was.