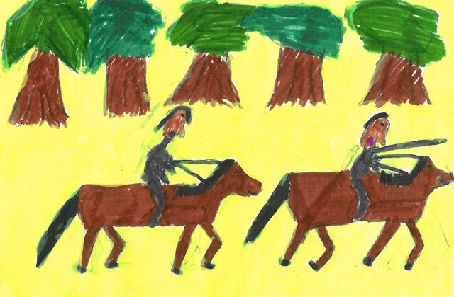 I thought a tale about a girl who wants to be a knight would be boring, but it wasn’t, because the author added magic to it, which made it fascinating.

This book is about a girl named Igraine, who wants to be a knight. Her parents and brother are all magicians, but she thinks magic is not for her. Igraine is soon going to turn twelve years old. While her parents are magically making her gift, something goes wrong, and her parents are turned into pigs. The only way to turn them back is with the hairs of a giant. Igraine goes on a quest to get the hairs. On her way home, she befriends a knight who is quite sorrowful. When Igraine returns home with the knight, she finds that Osmund the Greedy has laid siege on her family’s castle to steal the Books of Magic, which belong to her parents. Her parents can’t protect the castle because they are pigs, so Igraine’s brother, Albert, has to do it. That’s when the Sorrowful Knight steps in. What does the Sorrowful Knight do to stop Osmund? Find out for yourself when you read this book.

I like how the author described everything, because she was very specific, which helped me imagine the things, persons, and places in the book.

My favorite character is Igraine because she was very brave even when there are spiders, which she is quite afraid of. I like how the author mixed knights with magic because it can’t happen, but I like to imagine that it can happen. I felt sorry for Igraine when her parents turned into pigs, because I wouldn’t want my parents to turn into pigs, even if it is just for a small amount of time.

There were very few illustrations in this book, but when there were, they were very detailed and sometimes funny.

I recommend this book to fifth graders who are looking for an easy read, because it is written at a third or fourth grade reading level. Plus, it is a pleasing book.